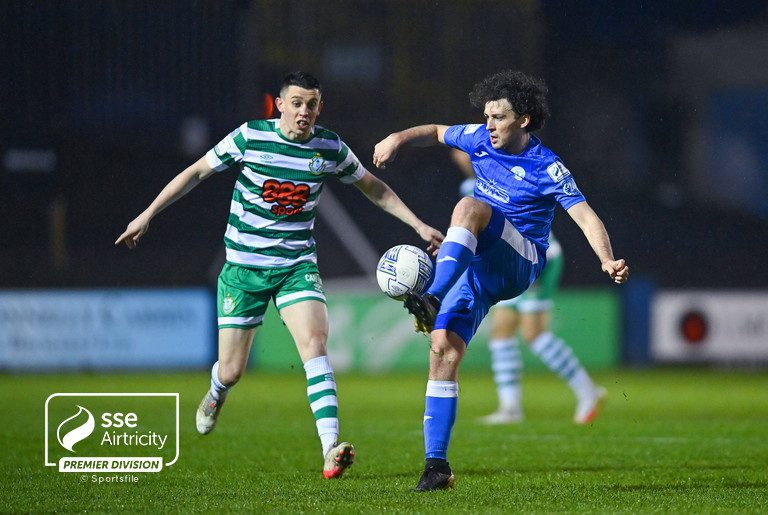 Harps goalkeeper Mark Anthony McGinley was called into action early on as he denied Graham Burke from opening the scoring.

Despite the early scare for Harps, it was Ollie Horgan’s side who nearly broke the deadlock as Elie N’Zeyi’s strike hit the post.

The league champions began putting the pressure on Harps as the first half went on, but thanks to strong defending by the backline and outstanding goalkeeping from McGinley, the home side remained level.

Unfortunately for Harps they couldn’t reach half-time before conceding. Rovers got a corner kick deep into injury time in the first half and defender Andy Lyons was quickest to react and head into the back of the net to put Rovers 1-0 up going in at the break.

Harps started the second period strong and nearly got their reward. Ethan Boyle got on the end of a Rob Slevin cross but Rovers keeper Alan Mannus saved the attempt onto the wood-work.

Ollie Horgan made some attacking changes to push for an equaliser, bringing on Mark TImlin and Bastien Hery.

Despite the positive changes, Harps conceded a second as Andy Lyons finished superbly to get his second goal of the evening.

Things went from bad to worse for Harps as McGinley was shown a red card after giving away a penalty for fouling Rory Gaffney inside the area.

Substitute Bastian Hery, usually known for his silky play in midfield, opted to go in nets for the spot-kick.

Much to his disappointment, the former PSG man couldn’t deny Burke from the spot.

It was an unfortunate defeat for Harps who were just missing the final touch in the opposition area.

Up next for Ollie Horgan and his side is another home game on Monday as Drogheda United travel to Donegal.