A Potted History by Bartley Ramsay

Finn Harps were formed in the early nineteen fifties as a junior club. Their name derived from the river that runs through Ballybofey — the River Finn — and a traditional Irish symbol — the harp. They first came to national prominence by winning the 1968 FAI Junior Cup. This enabled them to compete in the 1969 FAI Intermediate Cup. After they were knocked out of that competition, club director Fran Fields and secretary Patsy McGowan decided to apply to the League of Ireland for membership. The club was admitted into the senior ranks in May 1969 and played their first senior game against Shamrock Rovers on 17 August 1969. They lost the game 10–2. After initial worries that the club were not of sufficient standard and criticism of the league for accepting a Donegal team’s application, the club became a considerable force during the 1970s. 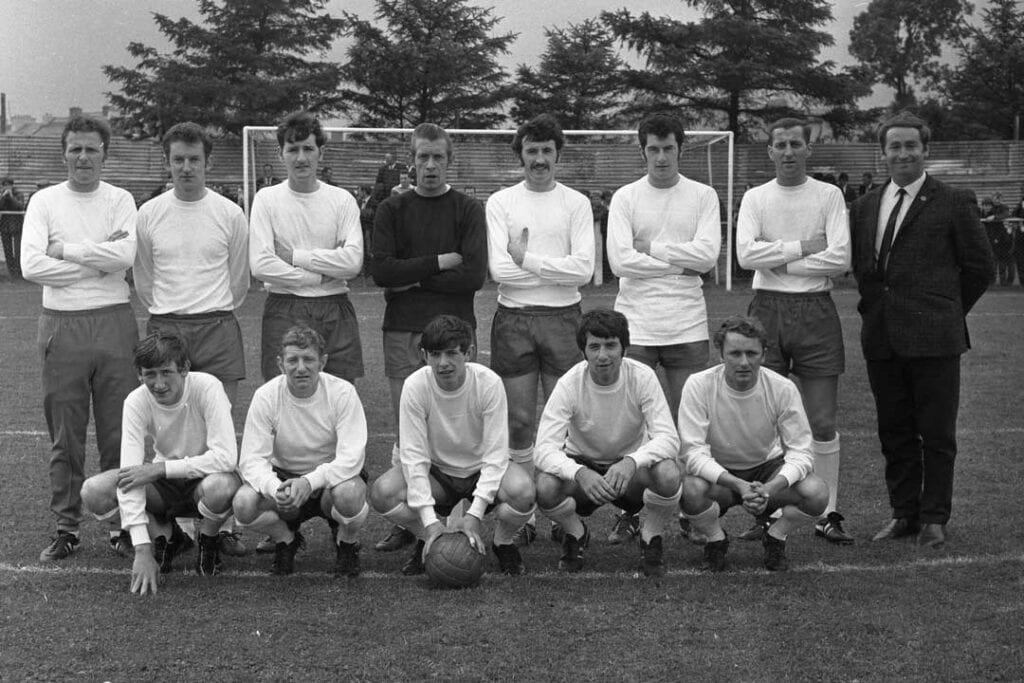 The Finn Harps team who played against Shamrock Rovers

Finn Harps won their first senior trophy, the Dublin City Cup, in 1971–72, with a solitary Brendan Bradley goal being enough to defeat Cork Hibernians at Dalymount Park. Two years later, Dalymount Park was again the scene of the club’s only FAI Cup win. Two goals from Brendan Bradley and one by Charlie Ferry saw off the challenge of St. Patrick’s Athletic. Finn Harps qualified for European competitions on four occasions during the 1970s. They appeared in the UEFA Cup three times against Aberdeen, Derby County and Everton respectively after finishing as runners-up in the league, and once in the European Cup Winners Cup, where they played Turkish Cup winners, Bursaspor. The club were again runners-up in the League of Ireland Cup finals of 1974 and 1975 to Waterford and Bohemians respectively. Through the 1970s, the club never once finished in the bottom half of the table and were widely respected for their attractive and attacking football style.

The 1980s saw a gradual decline of the club in terms of competing with the best in Ireland. An FAI Cup semi-final in 1981, a League Cup Final defeat in 1985 and a League of Ireland First Division Shield final defeat by EMFA were the highlights of the decade for them and in 1985 the club had been relegated to the newly-formed First Division.

A series of managerial changes were effected over the remaining years in the decade in an attempt to raise the club, but, none of these had the desired effect and Harps were unable to gain promotion to the Premier Division.

It was not until the early 1990s that there were signs of improvement. Patsy McGowan took over as manager for the third time at the start of the 1992–93 season. The next three seasons saw the club finish in the play-off position twice, although they were beaten both times; once by Cobh Ramblers and once by Athlone Town. McGowan was let go by the club before his aim of promotion could be completed.

Nevertheless, Finn Harps went on to win promotion at the end of the 1995–96 season to end their eleven-season spell in the First Division. During the Summer of 1996, a consortium of businessmen made an offer to take control of the club, but when their offer was rejected, it led to resignations of the manager and certain members of the club committee.

Charlie McGeever was appointed manager and despite time being against him, he managed to assemble a squad for the opening of the 1996–97 season. By the season’s conclusion, he had ensured that the club’s Premier Division status was retained.

Off the field, the remaining committee members set the club up as a co-operative society, selling shares to the ordinary supporters, to ensure that the club would be owned and run by the people who they felt would truly care about it. A long-term blueprint for the future was put in place.

In 1998–99, Finn Harps finished fourth in the Premier Division; one point behind Shelbourne in third position and just missed out on Europe. They made it to the FAI Cup final and after two replays against Bray Wanderers they lost, leaving themselves with nothing to show, bar the Irish News Cup, for what is considered to be their best season in more recent times.

During the 1999/00 Harps managed to retain their Premier League status but off the pitch they were forced to go public due to financial difficulties and debts amounting to £280,000. The following season despite a run of 14 games unbeaten Harps were relegated on the final day of the season. This ended a five-year run in the top-flight.

Former player, Jonathan Speak was the manager at this stage and he managed to take the team to the brink of promotion for the next couple of seasons but saw his team lose out in the play-offs both times. Harps did win the First Division Cup during the 2002/03 season defeating Kildare County over two legs. A poor start to 2003 saw Speak replaced by Noel King, who led Harps to the play-off before losing out to North-West rivals Derry City.

King himself was to last only six games the following season (2004) being replaced by Felix Healy. Healy ensured this time that Harps were no longer bridesmaids leading the club to the First Division title and automatic promotion. Harps were to last only one season in the Premier Division with Healy paying the price for poor results and being replaced by Anthony Gorman. He lasted just over one season.

The new man was a former Finn Harps and Derry City player, Paul Hegarty. Hegarty led his charges to promotion, in his first season 2007, by defeating Waterford United in a play-off.

The Club directors took the bold step of converting from a semi-professional, part-time club to a full-time set-up with 16 full-time players on the books. Despite this Harps fell through the trap door and were relegated, after only one season in the top flight.

The decision to go full-time was a gamble that did not pay off and, financially, the club suffered for a few seasons in an effort to make up the deficits incurred during the 2008 season. 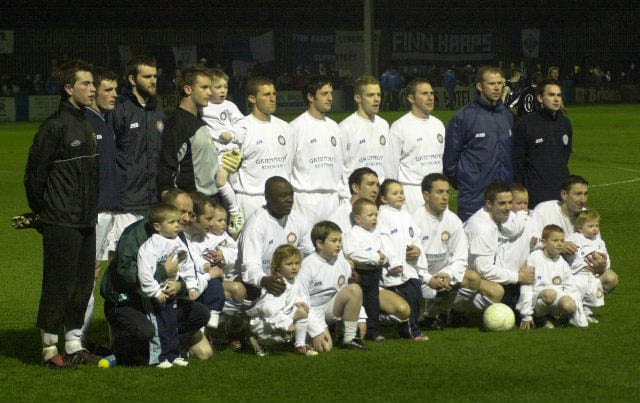 In the early 10’s Harps had a few managerial changes in a bid to lift Harps out of the First Division but none seemed to bear any fruit.   Former player James Gallagher, Peter Hutton and Felix Healy all tried with varying degrees of success but were unable to get a sustained promotion challenge going.

In 2014 things changed.  The club took the bold decision to appoint Ollie Horgan, an untried manager at League of Ireland level, as the team manager.  Horgan immediately set about getting a more professional regime in place for the players off the pitch and Harps had a hugely encouraging first season reaching the FAI Cup semi-final.

Since that time Harps have gained promotion twice. Firstly in 2015, with that never to be forgotten B.J. Banda goal, and then in 2018, both times Limerick being the team that suffered in the Play-Offs. Under Horgan have had four seasons in the top-flight (and three in the First Division) and last season Harps finished in their highest league placing since the 1999/2000 season.

Another Premier Division campaign beckons for 2021. 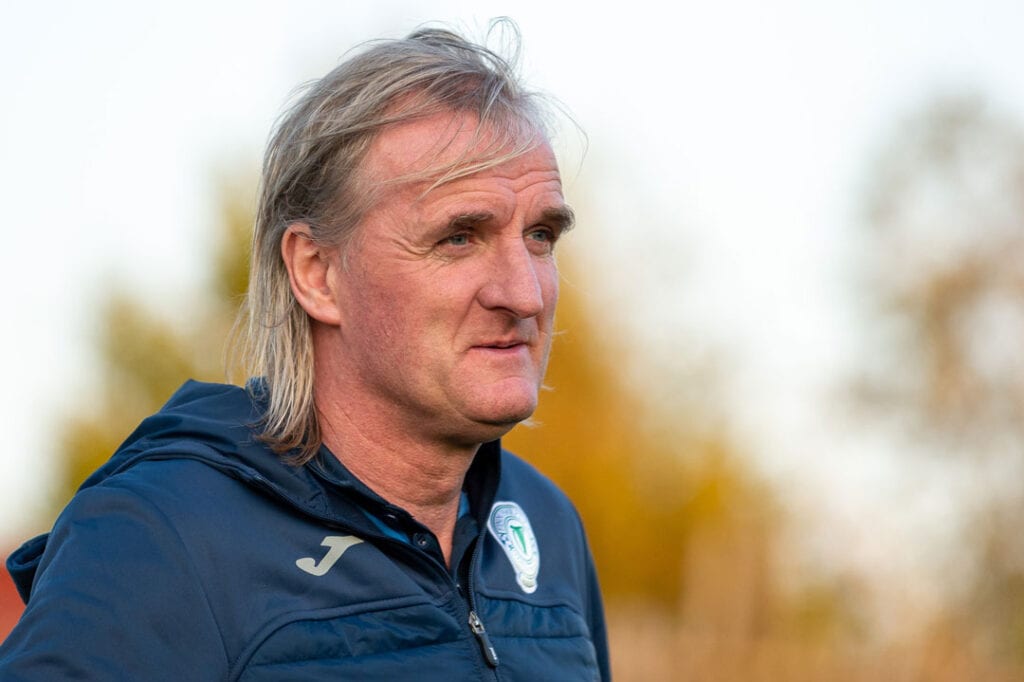 Get your copy of the official club history! 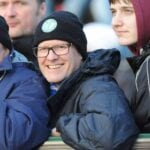 Bartley can be contacted on twitter @bramsay11 or via email on finnharpshistory@gmail.com