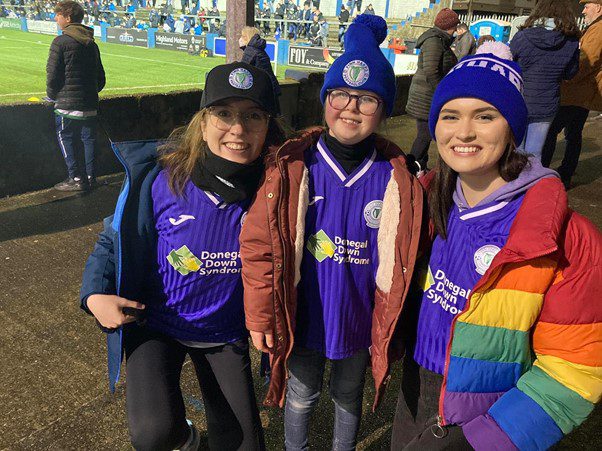 While players came and went, fair-weather fans fled, and the playoff hokey pokey continued, the one constant of Finn Harps F.C. has always been a deep-rooted sense of community. From the club’s founding back in the 1950s, from a grassroots organisation to a League of Ireland Premier Division team, that sense of community has remained; unwavering through promotion, relegation and through promotion again. Although the heart of Finn Harps has remained unchanged in the last 70+ years, the world around us has changed greatly.

In my life, much like many others, football has been a force for good that has brought families together and spawned friendships lasting lifetimes. Yet we can’t ignore the ugly underbelly of the sport that is riddled with racism, misogyny, sectarianism, ableism, transphobia, and homophobia. Which begs the question – How could one claim to be a community, if the community in question excludes its own members?

In a world divided by hatred, love is the antidote. Every time you enter Finn Park, this love is palpable. It is a love shared between a parent and child, grandparent and grandchild, school friends and frenemies from across the gantry alike. It’s in the pride you feel to dawn the crest or that first sip of the Tuck Shop Soup. It’s the leg up to get over the wall onto the pitch and it’s the arm on the shoulder leaving crestfallen following defeat. It’s the love of the club that ties us all together.

In a world divided by hatred, be the change you wish to see. Finn Harps F.C. represents that change, from food drives for local people in need to collections for the people of Ukraine. Finn Harps raised awareness and funds for worthy causes such as Donegal Down Syndrome, using their platform to highlight the work that is done by such an honourable association by proudly presenting their name on our jerseys.

However, this isn’t always the case. A study conducted in 2015 found that 80% of the participants had witnessed or experienced homophobia in sport with homophobic language the most common, along with 78% of people believing that an openly gay person would not be safe as a spectator at a sporting event. It is sad to say that we have all probably heard these chants but what really stings is the study found that following the spectator stands at a sporting event, the most likely space for homophobia to occur is in school during PE (Outonthefields, 2015). I often joke that as a child I learned to curse watching my Finn Harps Family but with that, I learned the value of community and hope. But in a world where outright homophobia is accepted in stadiums – what are the kids of today learning?

This is not the Finn Park any of us want to be in. The Finn Park I want to be in is one that welcomes everyone from all walks of life, one where the Pride Flag hangs alongside the Finn Harps flag as a beacon of hope to all, especially to our young people that within these gates we are a community.

In today’s world, it feels like every day there is a new cause. There is a notion that taking one group in results in the dismissal of another. I inherently reject this. We can support the LGBTQIA+ community while also collecting food for food banks, clothes for the people of Ukraine, and funds for Donegal Down Syndrome. At the end of the day, it is the people who make Finn Harps a team to be proud of. It is a sense of duty to our community that has set us apart from other clubs and will continue to do so.

As with anything, little steps make all the difference. So when asking yourself what you can do to make Finn Park an inclusive space, remember your community and all the different people who make up that community. Choose your words kindly and when you can, show that you are an ally to the LGBTQIA+ community, and in all cases, reject homophobia and transphobia in the forms of locker room talk and outward chants.

Finn Park is a place for everyone, everyone but those who spread hate.