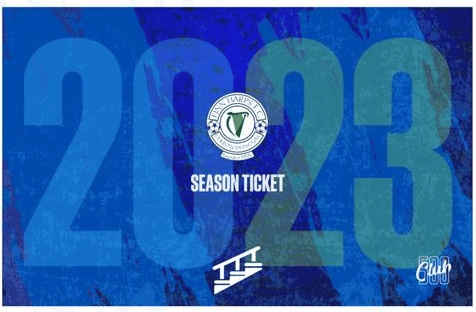 Finn Harps FC are delighted to issue our Season Ticket Packages for the 2023 season.  After such a tough season, in which our support was incredible home and away, it is time to pick ourselves up and look forward to another senior campaign starting in February.

With the club’s Board of Directors hard at work to recruit a new manager, it is now vital that we have the backing of our fan base to ensure we can build a competitive team to seek a swift return to the Premier Division.

As a fan owned and funded club the plans, and budget, for the 2023 season will as ever rely heavily on our supporters as our only investors.  Revenue committed in the form of both the 500 Club and Season Tickets are crucial to the club’s planning to deliver our vision for the future as we enter a new era at Finn Harps FC.

With 18 home games in a First Division where we hope to be competing at the right end of the table, season ticket prices for 2023 have been set as below.

We are delighted to continue our €5 Primary School Season Ticket, with the Secondary School version also reduced by 66% from last year to continue our focus on our ever growing, younger fanbase.  The increase in children and teenagers attending our games over recent season has been hugely satisfying, and the vibrancy and excitement they bring to the old ground is electric.  We hope ever more of this generation will get into the habit of becoming season ticket holders as they are truly the future of the club.

Meanwhile some mouth-watering Early Bird Prices are on offer for Adult and Concession (OAP or 3rd Level Student) tickets with FIVE games free if purchased before Christmas 2022.  Also, for the first time season tickets ordered before 4th December 2020 will have their Season Ticket Cards available for collection in time to get them in those Christmas stockings.  Orders after that date will receive a stylish E-Voucher which also makes a great last minute gift.  Buy now HERE