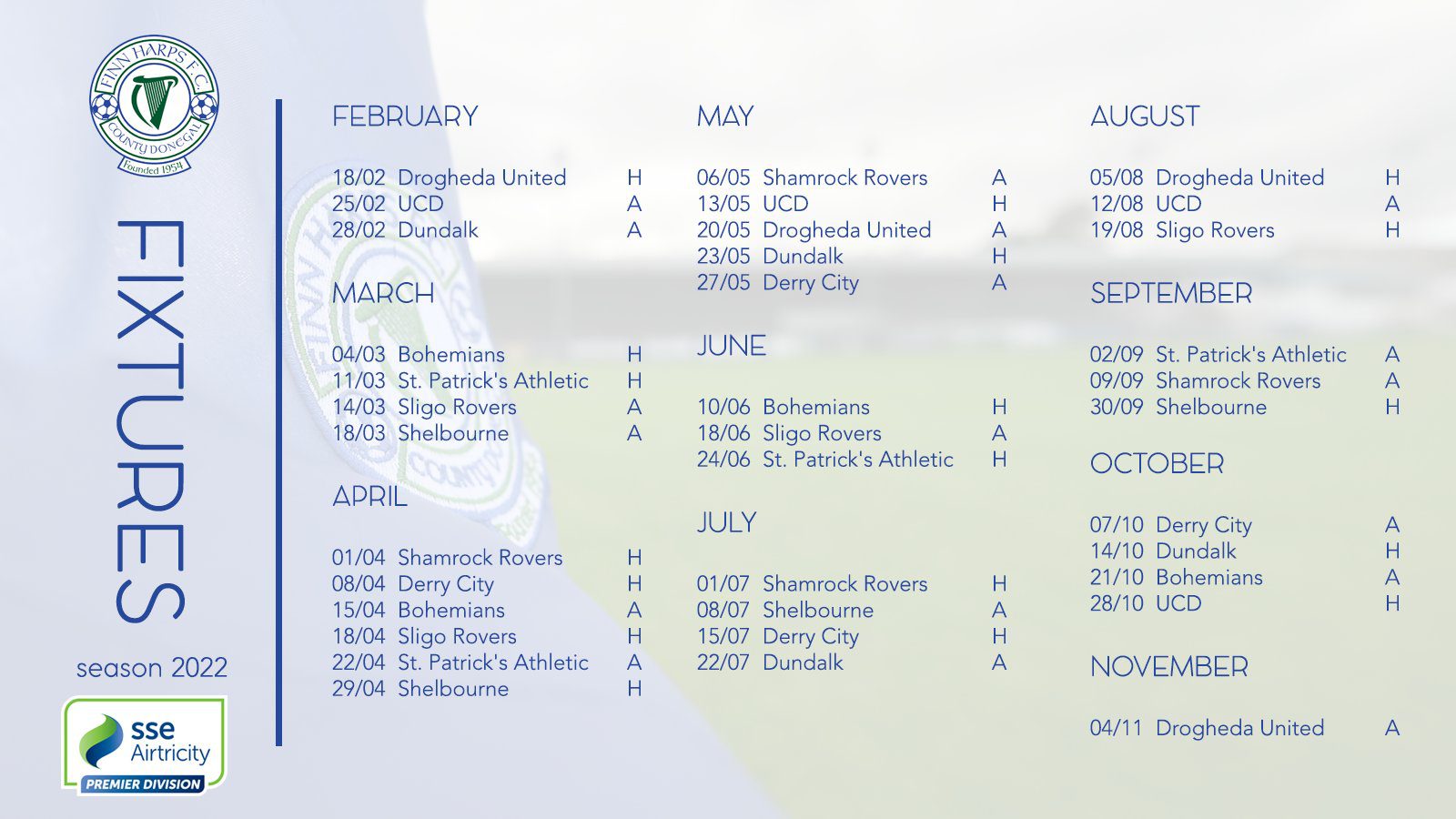 Finn Harps fans have been given their first glimpse of the fixture list for the 2022 Airtricity Premier Division season with the league campaign kicking off on 18th February with a home game against Drogheda United, the only team Harps failed to take 3 points from in 2021.  This is followed by away trips to newly promoted UCD, and Stephen O’Donnell’s Dundalk, before the return of last seasons 5th placed side Bohemians.  The first Northwest Derby of the season will be in the Showgrounds on the 14th March in the 6th game of the season, while Derry City visit Finn Park on the 8th April in game 9.

With last season having kicked off “behind closed doors” supporters will be hoping to be able to roar on the Boys in Blue from the off this time around.  And the club are offering some very attractive season ticket packages in the run up to Christmas for those looking for some last-minute gift ideas.

Covering all 18 home games in the Airtricity League Premier Division in 2022 our Early Bird prices offer an amazing 23% discount, or 4 games free!!  Yes, that’s 18 topflight matches for the price of 14!!!   The early bird offer runs until 1st January 2022 and ticket can be bought online at www.finnharps.ie/tickets at Early Bird rates as below (regular price in brackets).

As well as avoiding the need to purchase tickets online for every game, season ticket holders will receive priority in the event that attendance capacity is limited for any period next season.  A dedicated entrance will be provided for bigger games where resources permit. Season tickets will be in the form of a personalised card with a barcode to scan for access to each match.  A festive season ticket vouchers will be issued by email on purchase of a season ticket, with cards available for the start of the season.

In response to the large numbers of young people attending matches towards the end of last season the club are keen to sign up our next generation of Season Ticket holders.  Primary school children have been flocking to Finn Park in recent seasons and are the future of the club.  Younger supporters can avail of a personalised season ticket card and have pride in being a season ticket holder, while experiencing live football in a safe environment for just €5 for 18 games!!  Secondary school tickets are just €60.  These are an ideal stocking filler for the wee Harps fan in your life and are proving very popular with record numbers of primary and secondary tickets purchased already, while we have recently taken a significant order from a large gentleman from the North Pole.