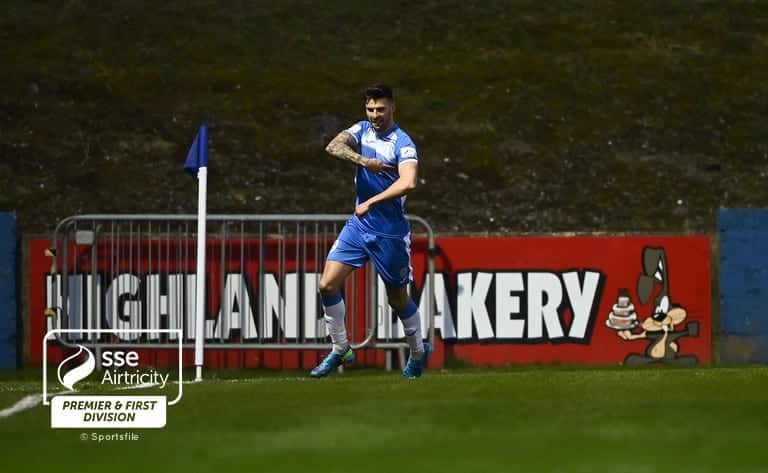 Finn Harps got their 2021 campaign off to a perfect start on Saturday evening after a well fought victory over Bohemians. Adam Foley’s goal just before half-time sealed all three points for the hosts.

It was the visitors who enjoyed the vast majority of possession to begin the game, with chances falling to new signings Rory Feely and Liam Burt. The Harps defence stood firm however and as time went on, the hosts began to grow into the game.

The first chance for the home side came after half an hour. Ryan Connolly’s corner eventually broke to Barry McNamee on the edge of the box but the Ramelton man dragged his shot well wide of the post.

Harps would be ahead before long however. James Finnerty’s attempted backpass to Talbot was left short and Foley reacted fastest to the loose ball. The Dubliner remained cool under pressure, rounding the onrushing Talbot before slotting the ball home to give his team the lead.

Harps could have doubled their lead immediately after the restart. Once again Connolly’s corner caused problems for the Gypsies, but Shane McEleney failed to hit the target from the edge of the box.

The second half began much like the first, with Bohemians turning the screw in search of an equaliser. Their efforts were frustrated however by Harps’ dominant aerial presence who were well equipped to deal with the crosses coming into the box.

Again Harps were presented with a chance to double their lead. Sadiki, who was enjoying a dominant display in defence rose highest to meet Connolly’s in-swinging delivery but couldn’t find the target with his header.

The hosts were almost made to rue their missed chances shortly afterwards. Ross Tierney’s effort snuck by Mark McGinley in the Harps goal but the returning Ethan Boyle was on hand to clear the danger. Tierney once again could have earned a point for his side at the death, as he snuck in at the back post but couldn’t find the target.