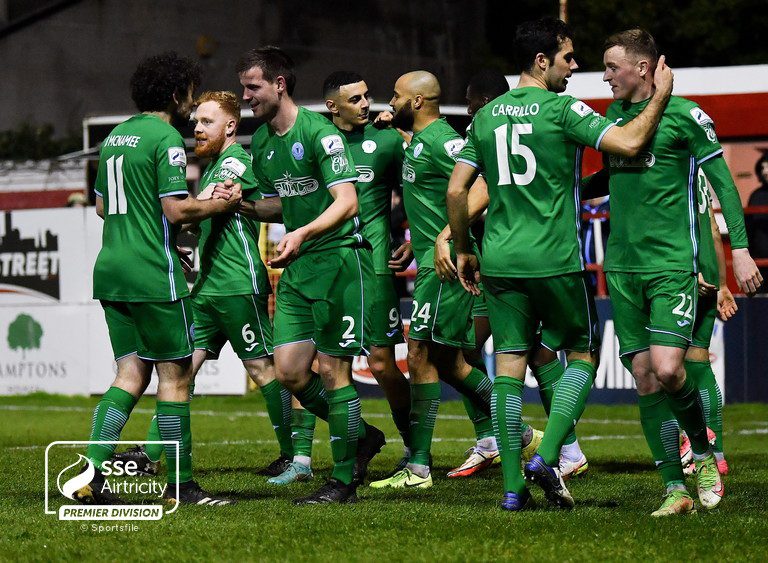 Finn Harps got their first win of the season tonight with an outstanding 3-0 victory against Shelbourne. Eric McWoods and Conor Tourish scored their first goals for the club with Ethan Boyle also getting on the scoresheet.

Harps were looking for a strong performance tonight and it could not have started any better for Ollie Horgan’s side as they hit the crossbar twice inside the first five minutes.

Despite it being a scrappy game Shelbourne struggled to contain Harps. Yousef Mahdy forced Shelbourne goalkeeper Lewis Webb into making a save but Horgan’s men finally broke the deadlock just before halftime.

A brilliant piece of play from Harps saw Mihalijevic play the ball inside the Mahdy who then laid it inside to Ethan Boyle who found the back of the net to give his side a deserved lead.

The second half saw both sides battling in the midfield in a physical affair. Despite both teams struggling to gain consistent momentum, Harps doubled their lead at the hour mark.

A free kick from deep fell to Mahdy in the box who then played it across to Conor Tourish who tapped the ball in from three yards out.

Harps defended impressively as the game went on as Shelbourne struggled to break through.

As the game entered the final minutes Harps managed to capitalise on poor defending from Shelbourne and Eric McWoods scored his first goal for the club with an easy finish.

It was a perfect performance away from home for Harps who will be happy to get their first victory in the league after some unlucky results so far this season.

Harps will look to carry this momentum into the next home game at Finn Park against current league champions Shamrock Rovers in two weeks’ time.