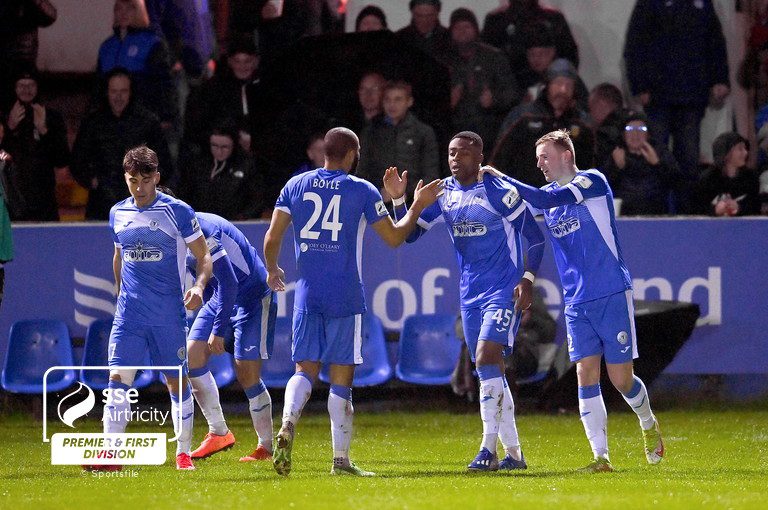 Terrific Tunde bags a brace in a 2-2 thriller against Dundalk.

Finn Harps have moved closer to safety in the SSE Airtricity League after playing out a dramatic 2-2 draw against Dundalk in rainy conditions at Finn Park.

It was an exciting night for Harps, who were playing in their new jersey after recently signing a new sponsorship deal with the E-Sports team GUILD.

The man of the moment Tunde Owolabi’s brace which helped Harps gain a massive point against the Lilywhites. The Belgian’s brilliant second half of the season continues with two more great goals against Vinney Perth’s team.

Dundalk began the game on top, creating a few half chances but nothing to trouble Gerard Doherty in the Harps goal. Despite the poor start by Ollie Horgan’s side, they took a surprising lead after captain David Webster’s pass found Owolabi who showed great skill to control, turn, shoot and score past Dundalk’s number one Peter Cherrie.

Finn Harps grew into the game after this and dominated the rest of the first half, coming close again with Owolabi who just headed over from a McNamee cross.

Unfortunately for Harps they could not bring the momentum into the second half and by the hour mark disaster had struck as they conceded two goals in the space of two minutes.

Michael Duffy scored a spectacular free-kick into the top-right corner from twenty-five yards out to equalise for Dundalk. Not even two minutes later Patrick Hoban was fouled by Shane McEleney and a penalty kick was awarded.

Hoban made no mistake from the spot as he slotted the ball into the bottom right corner, sending Doherty the opposite direction. Many fans had some deja vu as just a matter of weeks ago the two Dundalk goalscorers managed to score the exact same goals against Harps in the FAI Cup quarter-final replay.

Despite the disastrous start to the second half, Harps picked themselves up and just seven minutes later McNamee played in Owolabi who cut onto his right foot and arrowed his strike brilliantly into the bottom right corner of the Dundalk goal to equalise.

Harps were the better side for the final twenty minutes as they tried to push for the three points but they could not push past the Dundalk defence. Their best chances came through Dan Hawkins who slashed his shot just wide and Adam Foley’s brilliant cross which Dundalk defender Daniel Clearly nearly headed into his own goal.

A draw leaves Harps in 7th position, two points above Dundalk and five clear of Waterford who have a game in hand.

Harps will look to push up the table and secure safety in the next few fixtures where they face Drogheda United, Waterford FC and Sligo Rovers.