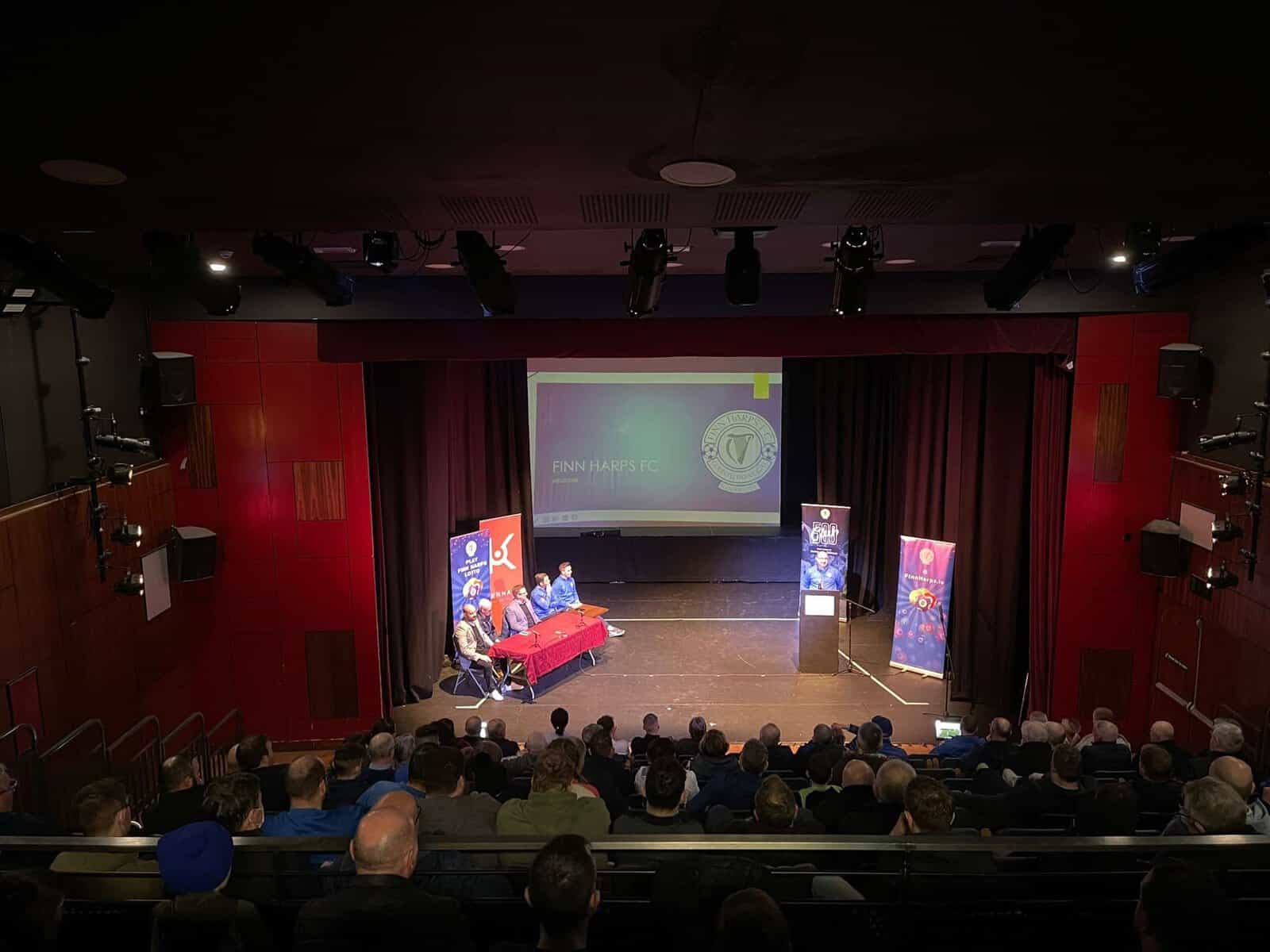 The Blue and White Army packed into the Balor Theatre last week to hear from a range of club representatives on the future direction of the club.  Club Director Aidan McNelis opened, paying tribute to the club’s supporters after what has been a difficult year, highlighting that despite relegation season ticket sales were already significantly ahead of the same stage last year – “Harps people are incredible!”.  Chairman Ian Harkin updated on next steps for the long awaited stadium project which has continued to proceed steadily through queries from the Department of Sport, with replies recently issued via the FAI.  A return to construction this spring remains the realistic target.  Harkin also confirmed that an announcement of a new major sponsor was imminent, with new home kits to be unveiled soon after.

Meanwhile Kevin McHugh and Paddy McDaid outlined plans for the men’s and women’s underage structures, with improvements to academy facilities at Killygordon high on the agenda, while 2023 will see women’s U17 and U19 sides represent the club at National League level for the first time ever.

Community Officer Ann Kelly provided a heart-warming review of the wide range of community activities carried out by the club in 2022, while 500 Club Coordinator Trevor Gordon gave an update on this vital fundraiser and the need to grow membership even further.

Finally, the irrepressibly enthusiastic Dave Rogers, took the stage to deliver a rousing finale, giving supporters a detailed presentation on his ethos, tactical approach and what to expect from Harps in 2023.  Dave also introduced his backroom team to date as well as giving some details on the exciting new partnership with EISports which will see the advanced Titan 2 wearable GPS system become an important tool in the club’s player development programme.

With the atmosphere already electric, the excitement among supporters for the season ahead was enhanced as the new gaffer promised attacking football, hard work and players who are proud to represent Finn Harps FC.

Comparing the blues of Donegal to the “People’s Club” ethos of his hometown club, Everton FC, Rogers paid tribute to the clubs’ supporters who give their time as volunteers and commit money as season ticket holders and 500 Club members, without which the club simply would not be sustainable.

Speaking to club media after the event Rogers highlighted in particular the importance of the 500 Club as the lifeblood of the club.  “The 500 club really epitomizes everything we are trying to achieve as a club, it allows me to continue to build structure, professionalism and stability, which the technical staff and players can then implement and deliver in a sustainable and effective way.  Please join up if you are in a position to do so and we can grow this club together.  Together stronger!”

Since the 500 Club was relaunched 3 years ago, as well as providing vital, reliable income for the Harps as a fully fan owned and funded club, this fundraiser has seen an incredible €75,000 in cash prizes given away to over 450 winners!  Members also receive discounts on Season Tickets and on the Online Shop, as well as pre-sale access to tickets for Rep of Ireland home and away internationals.